skip to main | skip to sidebar

We are pleased to announce the Grand Opening of our 13th Floor Tap Room on Saturday, November 9th from 11 a.m. to 11 p.m. To celebrate the occasion, we're closing out our 2013 Award Tour by pouring all 12 of our beers that have won national blind tasting medals within the last 16 months!

Beginning in the summer of 2013, we featured multiple medal-winning beers at various beer festivals, tastings and other events throughout Ohio, dubbing it the Award Tour 2013. We have won numerous medals from the Beverage Testing Institute's World Beer Championships; their Beer Judge Certified scores serve as the reviews for All About Beer magazine. Five of the 12 medals were the highest-rated beers in their respective categories (see the full list of medal winning beers below).

As the list of awards continued to grow, it became obvious that a big event was warranted to close out the run of accolades. Upon recently adding a tap room to our production brewery at 165 N. Fourth St. in downtown Columbus, the perfect event presented itself.

To announce the new 13th Floor Tap Room and to highlight all 12 of our national medal-winning beers, Elevator Brewing Company invites all fans of great craft beer to come celebrate with us on November 9th. Regular tap room hours are from 11 a.m. to 5 p.m., but starting at 5 p.m. there will be special tappings of limited and rare beers, culminating with the tapping at 10 p.m. of the last keg of BarBar Bourbon Barrel Barleywine - judged the Beverage Testing Institute's highest-rated Barleywine of 2012 with a score of 97.

There will also be bands and food trucks to keep the celebration going. Plus, it's a Buckeye football bye week, so the celebration will not interfere with anyone’s football enjoyment. Please come out and support Elevator Brewing Company – the local brewery that is winning national recognition.

*indicates this beer won its category for the year.
Posted by Elevator Brewing Company at 3:01 PM No comments:

The fifth annual Procrastinator Homebrew Competition is upon us. Entries are due no later than Friday, July 19, 2013 ($5 per entry). Please submit two 12-oz. samples or one 22-oz. sample in unmarked bottles.

BJCP categories 6-15 only. "Best of Show" will be brewed on the system at the Elevator Restaurant & Draught Haus.

If you have questions or would like to judge, please contact Mark Beery at beerm123@yahoo.com.
Posted by Elevator Brewing Company at 5:23 AM No comments:

Elevator Brewing Company is getting revved up for American Craft Beer Week 2013 - "The Mother of All Beer Weeks."

Check out our schedule of events!

Thursday, May 16 - Join us at the Elevator Brewery & Draught Haus Restaurant at 8 p.m. sharp for a "Coast to Coast Toast" to craft beer. elevatorbrewing.com

Posted by Elevator Brewing Company at 8:12 AM No comments:

It's going to be a remarkable year. We promise. 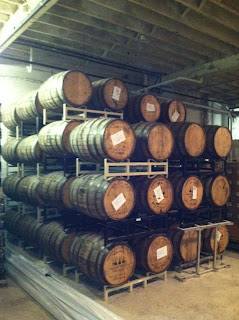 Sixty whiskey barrels full of porter, due out in January 2013...
Posted by Elevator Brewing Company at 11:06 AM No comments:

Here's our schedule for the 2012 American Craft Beer Week -- "The Mother of All Beer Weeks." Unless otherwise noted, these events will take place at the Elevator Brewery, 165 N. Fourth St. in downtown Columbus.

Wednesday, May 16: MBA & PHD reunion and tour. 7-9 p.m. $10 per person. Featuring beer and burritos from the Burrito Bus. Burritobus@gmail.com

Thursday, May 17: Elevator Beer Film Festival at the Grandview Theatre. "The Saddest Music in the World," "The Adventures of Bob and Doug McKenzie: Strange Brew." Doors open at 5 p.m., films at 7 p.m. and 9:15 p.m. $20 per person. Includes film, chat with the reps, contests and a commemorative t-shirt. http://www.grandviewtheatre.net/, festival@grandviewtheatre.net

Promote Your Page Too

Welcome to the Elevator Brewing Company blog! Here you will find weekly updates about the Elevator Brewery & Draught Haus, a truly unique dining and drinking experience in Columbus, OH. Check out the historic restaurant at 161 N. High St., or stop by the brewery at 165 N. Fourth St. for one of our monthly tours!
Restaurant: (614) 228-0500
Brewery: (614) 496-3575
elevatorbrewing.com